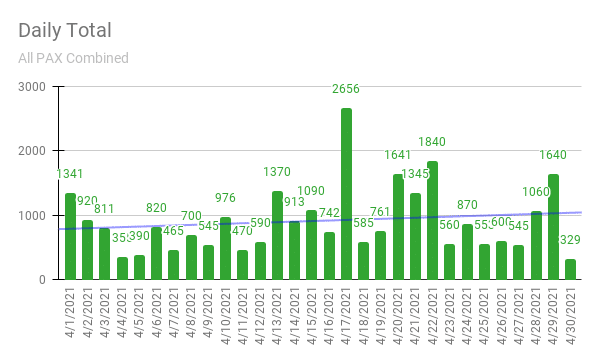 15 PAX through their name up to complete the 1,800 prescribed Big Bois for the month of April. Together, they recorded 27,483 combined Sit-Ups, 102% of all PAX’s goals combined. In fact, due to not all PAX completing the challenge, each day’s participating PAX actually completed just over 120 Big Bois per day, 2X the prescribed amount.

This month’s MVP is definitely Gas Station. Not because he had the highest total—4,066—but because he did so while not recording his first rep until almost TWO WEEKS into the month. That’s an average of 239/day. In the “Daily Total” chart, that one bar standing out in the middle is Gas Station’s giant, metaphorical middle finger to the status quo.

He also recorded the highest single-day total with 1,031. YHC has it on good information that the only reason that number isn’t higher is out of deference to share a temporary “#1 in the Region” position with one Moneyball. He also issued several challenges to accelerate the other H.I.M. in this month’s Quad P.

Out of the 15 PAX who threw their name up for this month, the seven below finished the monthly goal of 1,800 (average of 60/day). Dirt Bike, YHC, and McGruff (YHC assumes, based on the month’s trend) successfully completed at least 60 Big Bois each calendar day.