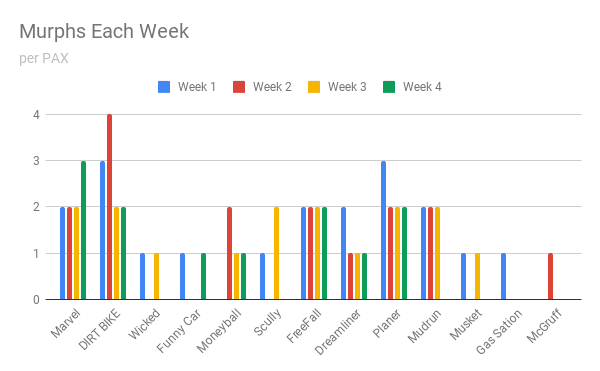 13 H.I.M.s signed up to throw themselves at a weekly Murph in preparation for THE Murph Challenge. That amounts to 52 total Murphs, and they delivered: 63 total Murphs were completed over the four week challenge, or 121% of what was required. Roughly half (54%) of the participating PAX logged 4+ Murphs over the course of the challenge. As a region, they ran 371 miles and completed 8,639 Pull-Ups, 19,969 Merkins, and 25,104 Squats. Week to week there was a bit of a drop off in total reps and completed Murphs (19, 16, 16, 12), but they stayed strong with over half completing a Murph in the last week.

Of the 13 Participants, 5 reached the stated goal of at least one Murph per week: Dirt Bike, Planer, Marvel, Freefall, and Dreamliner. These 5 accounted for 42 of the region’s 63 Murphs, or 67%. The following PAX completed at least on Murph over the course of the month. The number following their name is the total completed:

Good job to all participating PAX! Get after it and SYITG!