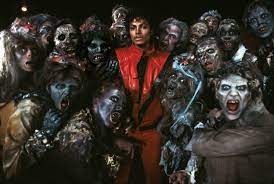 Get your shots, its the cool thing to do

As tribute to Thriller’s namesake, Michael Jackson, all exercises (dances) were themed around relevant songs/moves.

Pax split in 2 groups.  Group 1 does the dance move until group makes a mosey to a light pole and returns at 75%

“Smooth Criminal” is demonstrated to the group- alternating toe touch on coupon- to be used as resting move while awaiting return of all Pax.

“If you wanna make the world a better place, take a look at yourself and make a change” –Michael Jackson (probably for most, not literal change of gender or race, but change from within)

“The lord is not slow in keeping his promise, as some understand slowness.  Instead he is patient with you, not wanting anyone to perish, but everyone to come to repentance”– 2 Peter 3:9