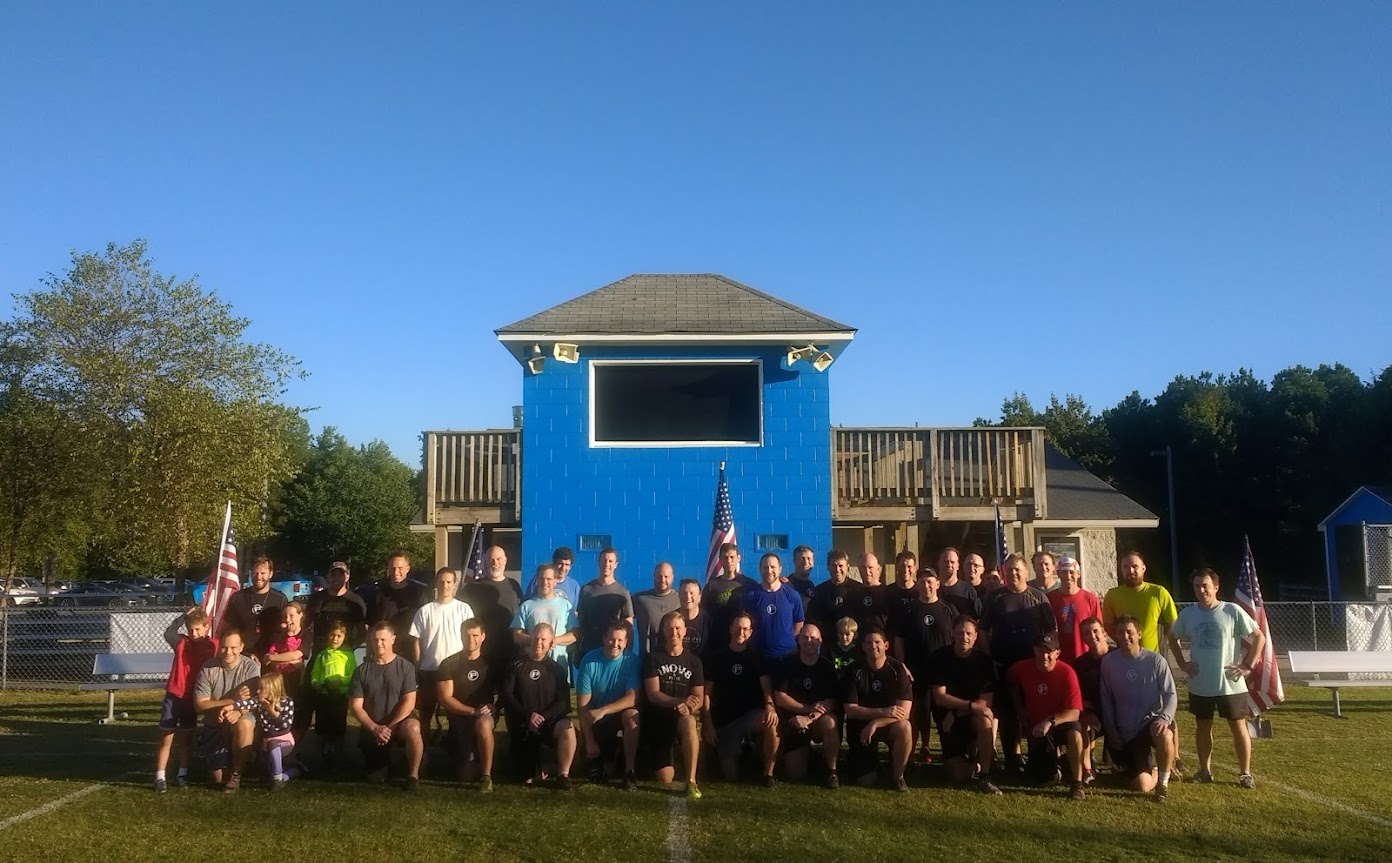 The 3rd Anniversary Convergence was a double-dip extravaganza to celebrate three years of F3RVA.  Thirty-nine (39) of the faithful gathered in the darkness at 0600 at GridIron, and forty-three (43) of the faithful, plus seven (7) FNGs — fifty (50) in all — gathered at 0700. By my number-cruncing, it added up to 60 different people posting at one or both workouts, with 10 posting early and not late, 21 posting late and not early, and the balance double-dipping.  It was a perfect early autumn morning, and the grass, sand, and pavement were bathed in chilly morning dew, which we promptly began rolling around in (and face-planting into).

Hand-off to Rosie, who ran the centerpiece of the early workout — a terrible-awful Charles Bronson, followed by one leg of a merican beast.

Hand-off to WhiteDeer, who ran wheelbarrows from one sideline to the other, and then back again.  He then ran a boat/canoe series that must have been very effective based on vocal grumble-chatter coming out of the PAX.  Or maybe he ran the boat/canoes first.  All I know is that he was liberal with his constructive (??) criticism of others as to their form.

Brief rapid-fire Mary ad hoc by ChumBucket to permit Johnsonville to retrieve a record-keeping pad from his sporty Camry (no, TYA, that does not constitute “clipboarding’).  Mary series included Hello Dollys x 15, APDs x 15, Box Cutters x 15, and LBCs x 15 with some leg lift holds in between.

Johnsonville took the initial Q briefly in the center of the 50 yard line. The COP stretched from sideline to sideline. He gave a brief disclaimer, and started the fun with 25x SSH, 10x mericans, and 20 hillbillies.

Hand-off to Phonics, who continued the warmup with a machine-gun COP.  I have no recollection what Phonics did, but he claims it was as follows:

Hand-off back to Johnsonville who introduced small group leaders, Offshore, Spit, WeddingSinger, and the HoneyDo/Upchuck team and divided the PAX into respective teams. For the next 45 minutes, the four teams rotated through each of the following for stations:

[FROM JOHNSONVILLE]  It was an incredible honor and privilege to organize this event and to pull together some of our best leaders from around F3RVA to showcase what we do day in and day out.  Each of the leaders contributed their part of these workouts, and I thoroughly enjoyed the opportunity to get a double-dose of gloom.  Thank you all!

Guinea, being rather scholarly despite how he may come across, informed me of the actual definition (not urban dictionary definition, mind you) of “merkin.”  See here if you dare.   At least in my mind, that is not quite in sync with F3 ideals and culture.   As you probably know, the name of the common F3 exercise derives from “American-style Push-up,” or, if you happen to be a Bush or from the South, ” ‘merican-style.”  I suggest we spell and pronounce it Merican.

[FROM UPCHUCK] Nice work this morning fellas and Pinkie. Way to dominate the 4 stations.  Hats off to FNGs Banner and Shrek. Way to push through a tough set of donkey kicks and WWII sit ups. Those are unforgiving.

Gomer Pyle provided his usual energy this morning providing a fine example of how to crawl, get sandy, and do burpees. Well done. YHC Peyton Manning has to give some feedback to Hardywood Brad Paisley on the abyss mericans. Not quite perfect form. Almost there. Close. Basically, almost there.

Luckily, Hardywood redeemed himself by organizing the finest of breakfasts. Yum, yum. Thanks to Nate for doing the cooking. TClaps on that aioli. What a pleasure to lead this fine group. Way to push through hour 2. Great showing in the gloom this morning, gentlemen!

[FROM OFFSHORE]: YHC was continually haunted by “If you can’t Q it, don’t do it” because of being smoked by the preceding leaders’ exercises, the difficulty of the stations, and the ability of the PAX in his group to just crush the exercises. The Q often found himself as the six and Splinter, Mulder, and Phonics routinely led the PAX. Many thanks to Jville for organizing an epic beatdown.